Unique Weddings in Israel You Will Never Forget

After learning more about Gev and Inbar’s backgrounds and passion, I was eager to hear about some unique weddings in Israel that they have planned.

Since their speciality is mainly foreigners getting married in Israel, I was also curious to understand how they successfully mix the two cultures. From boho weddings to combining Israeli and creole dishes, Gev and Inbar’s creativity never ceases to amaze me.

They are able to seamlessly turn a couple’s dream into a reality. This goes as far as convincing a Rabbi to wear a full Greatest Showman getup! So, be ready to be inspired and even a bit jealous of these once-in-a-lifetime events. 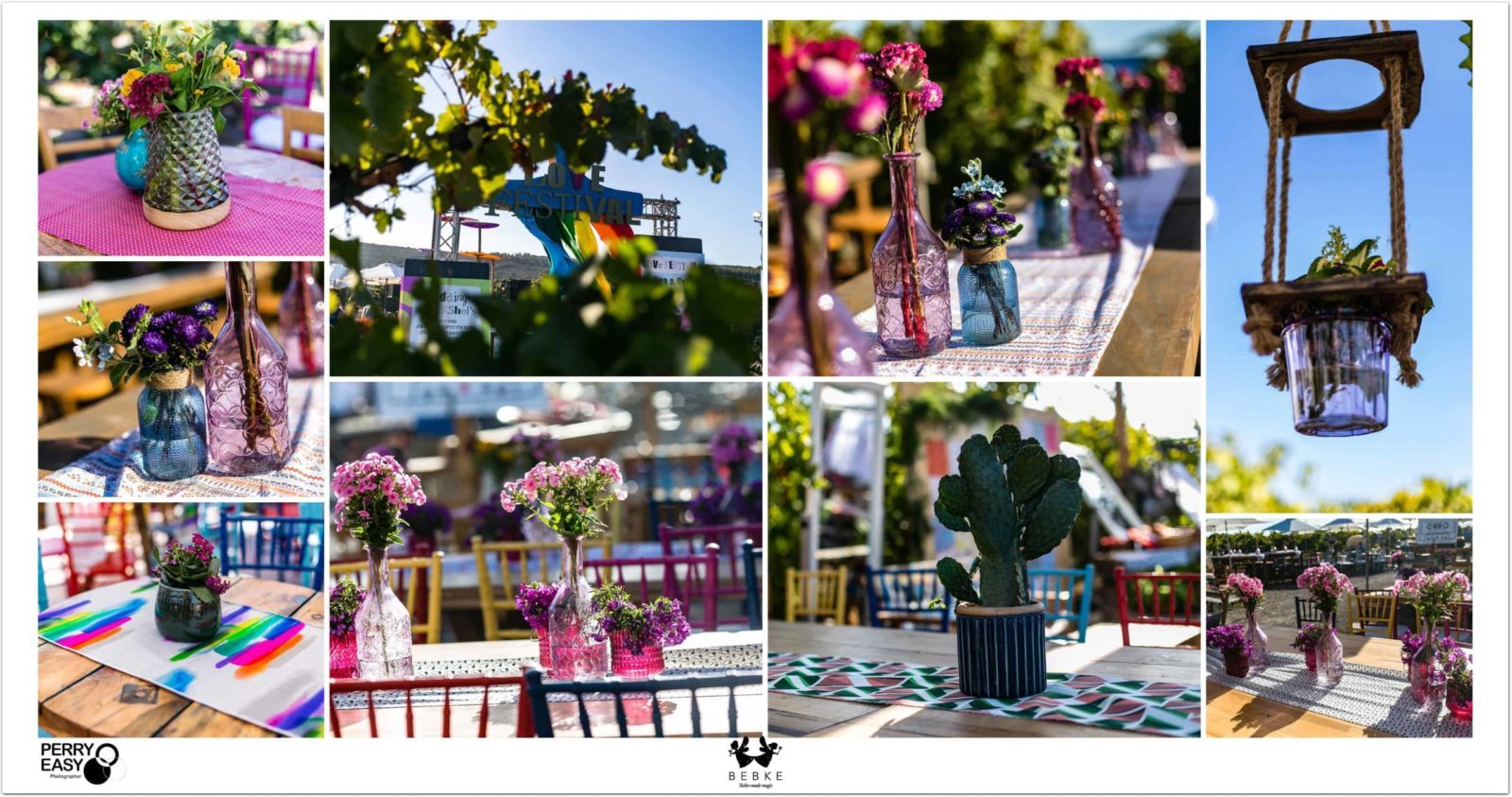 Q: How do you blend Anglo and Israeli traditions?

A: We first need to understand what is important to the couple and how they want their marriage in Israel to look. For instance, we planned an English and American-English wedding with all guests coming from England. The couple wanted to bring an American vibe, specifically Haight & Ashbury Street in San Francisco.

With inspiration from Janis Joplin and The Grateful Dead, the Kabbalat Panim reflected this in the music, food and decor. Picture retro rock and roll, flower child and sixties vibes.

As everyone sat down for dinner, the aesthetic began to become more Mediterranean. Guests experienced this shift in the food and in the current Hebrew songs that were played. The wedding organically transformed from a bohemian feeling into the flavors and sounds of Israel.

At another wedding, the couple was American and Israeli. With influence from American weddings, they wanted all 200 guests to be seated during the ceremony. If you have ever been to a typical Israeli wedding, you know that most guests prefer to stand and then rush the couple after the glass is broken.

We had six staff members making sure that everyone was seated before the chuppah began. This, as well as a strategically placed flower decoration, allowed the couple to comfortably walk from the chuppah.

As this was an American and Israeli wedding, the couple also wanted to stay true to the groom’s Israeli background.

So, the chuppah’s poles were held up by family members and friends. In terms of celebration, they wanted the feeling of a backyard Israeli party. The food was also something to note – we mixed Israeli and American southern creole dishes. Think hummus, eggplant and tahini followed by gumbo and jambalaya.

We also planned an Israeli/Dutch wedding where half of the guests were Dutch. They brought gin from Holland and Dutch cookies to make the event feel even more authentic.

Q: How do you combine the design elements with food, drink and the overall experience?

A: After we have a clear understanding of the bride and groom’s preferences and expectations, we begin to see the whole picture and go from there. Recently, a couple wanted their wedding to emulate The Greatest Showman. They decided on a venue in Yafo with high ceilings which worked perfectly for this vision.

Every aspect of this wedding reflected the theme – there were jugglers, a parade, circus food, and a specialty popcorn cocktail. Most notably, the Rabbi even dressed up as a circus showman!

Now, that is true dedication to a dream and one of the most unique weddings in Israel!

We would love to bring your vision to life! Are you ready?

Want to get married
Bebke-Style?

We produce out-of-the-ordinary events in Israel for clients from all over the world. We’ve even won international prizes for it. Our events are known for their perfect, precise mix of location, design, flavor, sound, and beauty – all of which come together to create a day that’s 100% you (with a little Israeli zest thrown in for good measure, naturally). Events without boundaries and without brakes. Have we piqued your curiosity? Fabulous. Come see more.